Unheard is Eve Horne’s campaign to forge solidarity among womxn in the music industry, raising money to help girls and womxn from disadvantaged backgrounds get educated in music production. At the same time, the striking black on white t-shirt based campaign is raising more awareness of the stark gender imbalance across the music industry, as the Unheard and their supporters post selfies of themselves across social media.  Eve Horne, music producer, singer, songwriter, boss of Peak Music, Native Instruments certified specialist and founder of the Unheard campaign, is no stranger to disadvantage – “I call myself the box-ticker: a mixed race, gay, woman who grew up on a council estate, but I’m willing to put myself in the firing line to make change happen”. 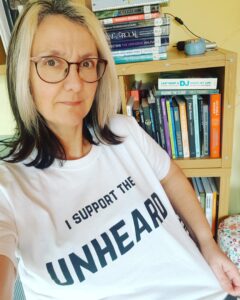 It was a hard decision for me to choose which shirt to buy and wear. As a white, educated, woman from a rich country, with a job that allows me to speak very loudly about what I believe, I am most definitely in a position of privilege. Although as Eve reminded me, the campaign is about “us coming together and linking arms, not about individuals”,  I felt uncomfortable claiming I’m unheard – even though as a DJ and music producer I am definitely in a gender minority. As Elizabeth De Brito has eloquently written recently about women in the classical music world, all too often intersectional issues of race, class, disability and sexuality get over-ridden by gender – not all women are created equal and they definitely don’t ride through life in the same boat. So I definitely feel more comfortable supporting the Unheard than claiming to be one.

But after chatting with Eve last week I’ve really reflected on the extent to which I actually am heard. At least outside the ‘church of the converted’ to which I preach when I’m posting stuff in the womxn’s groups and networks – vital work though that is. I have found that, despite direct requests to them, most of my male acquaintances in the music industry don’t engage with In the Key of She posts on social media. In my work with the industry, I’ve been asked to take out sentences that might mean the organization in question comes under scrutiny itself for its diversity and inclusion practices. My pleas to underground festivals to address their (white) male-dominated line-ups and offers of help to them go unanswered, are brushed aside, or met with outright hostility. I might have the privilege to speak – but is anyone actually hearing me? 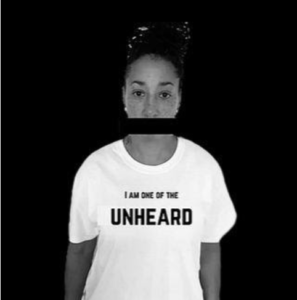 Even International Women’s Day, (or Women’s History Month in the U.S.) can be seen as a form of silencing – we can all shout from the rooftops and wave as many flags as we want today but if that momentum runs out at midnight, then like Cinderella, we go back to being hidden out of sight the rest of the time. The same can be said of Black History Month, Pride month, and so on. If the racket we make during those times doesn’t echo into the future then change never happens, but at least we’ve had our day/month in the limelight, eh? As Eve told me during our interview last week “we need to stop talking about stuff and DO SOMETHING” and that we includes all of us.

If you think this debate doesn’t apply to you, then use the privilege that’s allowed you to turn that volume down for yourself to help those who do need your help. Find, listen to, and play music made by womxn. Share fxmale artists’ content online, book them for your parties, call out misogyny and sexism when you hear it – even if you think its unintentional or ‘just a joke’ – and that means on social media too. Womxn are constantly subject to trolling on their online content – challenging vicious, insulting, patronising comments helps womxn feel supported and strong – something that’s needed in order for more womxn to make themselves visible without ‘putting themselves in the firing line’, as Eve put it, just for sharing their art. And it’s this visibility we desperately need if we are to change unconscious bias towards men in the music industry and inspire young girls and womxn to get involved.  If we really want to support the Unheard, we need to act as well as speak, even though that might be uncomfortable for you, or mean you have to defend against a ‘backlash’ yourself.

To get involved in the campaign, all you need to do is head to the Peak Music website, buy a t-shirt, post a hashtagged selfie and take part in a short interview with Eve about your story – why are you Unheard, or how do you support those who are Unheard? These stories and photographs of those taking part will become part of a book as a lasting legacy from the project. Over 70 t-shirts have been sold so far. 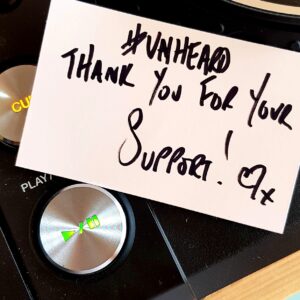 Thank you card that comes with your t-shirt