If you were an alien, beaming down the i360 to the 2019 Brighton Music Conference, I don’t think you’d have realised that the electronic music industry is a very male dominated world. Certainly at an iconic and futuristic venue, BMC 2019 felt like a vision of the future I’d like to see, in relation to gender at least. I think I am right in saying that every single panel included male and female speakers, and almost every evening event had a mixed line-up. From production, DJing, branding, and legal issues, to cutting edge tech, publishing, mental health and sustainability, women were talking about and playing their specialisms right across the board.

Of course this kind of thing doesn’t ‘just happen’, BMC’s model of inclusivity, was in no small part due to the Women in Dance Music Collective’s involvement with the conference organization – making sure that women are visible, amplified and empowered to stake their authority and claim their expertise alongside the men. There were no panels on ‘diversity’ or ‘women in dance music’ and no corralling of ‘gender issues’ into separate discussions where the tendency can be to speak only to those who are already sympathetic to your message – important though this may be. Against this backdrop, the effect was that as a female delegate I felt super excited to see other women up there talking about important issues, sharing their stories and helping me feel ‘yeah! I can relate to you, and I feel included’. It was my first music industry conference, and I felt empowered where I had expected to feel out of place. 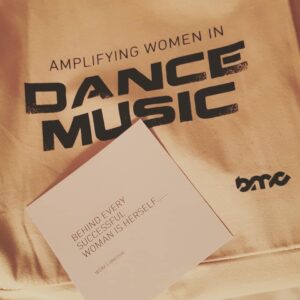 Nonetheless, we need to be careful not to become ‘gender-blind’. It can be easy to think our work is done, when a conference makes such great progress as BMC did this year – and for sure, making women more visible in this way for topics other than being women is a huge step forward. But, as one of my project interviewees said to me, ‘people are saying we don’t have an issue with gender inequality any more because… Nina Kraviz’. We mustn’t let the higher profile examples obscure the back stage realities. The gender pay gap for the three biggest music labels (Universal, Sony and Warner) still stands at 29.3% this year, Only 7% of Ableton Live users are female*, and 95% of recognised electronic dance music producers are men. At the time I’m writing this, there is a very public outcry on social media about the misogynistic artwork for Vakula’s latest EP, and far too many of the women I have interviewed for the ItKoS project have told me stories about sexual harassment and appalling treatment by men in the industry. Yeah, our work here is definitely not done.

But back to the conference. My first BMC was a productive and inspiring one. Between nervously arriving at the Association for Electronic Music welcome drinks on Wednesday, and leaving the Cassini Circles gig on Friday night, I filled two A4 pages with the names of great contacts, and had countless fascinating conversations. I sat in the sun by the seaside, listening to great music from the Data Transmission ‘Discobug’, played with synths, and discovered new artists at venues in underground arches, back street pubs and 450ft above Brighton promenade in the i360 pod! 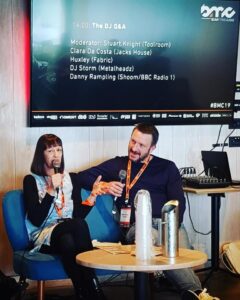 I explained my project on an endless loop to all sorts of folks who were genuinely interested and enthusiastic about helping the research. I grew in confidence each time I launched into my pitch – clearer about what I am doing, and why it matters. Every time I heard myself explain the research and what I hope the outcomes will be, I felt proud that I have this incredible opportunity to assemble a solid and credible evidence base from which we can speak confidently about women’s participation in the industry, supporting their success strategies, and navigating the challenges they face.

So what sorts of things did I hear? Everyone had their thoughts on why women don’t seem to make the jump from DJing to Producing in the same numbers as men – even though they all agreed that producing is an essential part of an artist’s credibility and reputation. In this day and age, it’s not enough to ‘just’ be an excellent selector and/or put on a great show. On more than one occasion I heard the idea that men are simply more focused and single-minded than women when it comes to production, e.g., working with software and tech. Boys grow up spending hours playing X-Box and Playstation endlessly, so the transition to spending hours in Logic or Ableton is far less for lads, than for girls who might not have had that ‘training’. 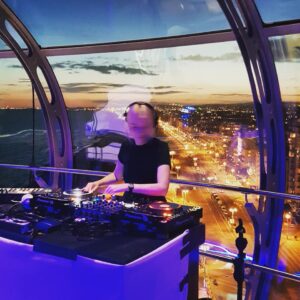 In a similar vein, maybe women simply have more to do, or want to do more with their lives than dedicate huge swathes of it listening to the same 8-bar loop or meticulously tweaking envelopes, getting productions to release-ready quality. This is not something that’s borne out in the interviews I’ve done so far, but could be something interesting to question. Perhaps its just that women are far more reticent about their technical prowess – During her analogue demo, I heard even Rebekah say that she wasn’t very technically proficient. I couldn’t help wondering if I’d hear that kind of thing from a guy. 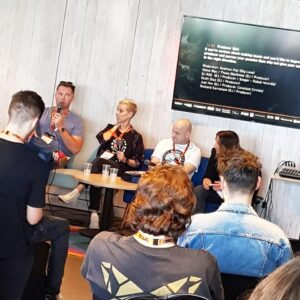 In fact it was very striking that in the Producer Q&A panel on Day 2, the audience was overwhelmingly (what looked like) white, straight, young men, whereas in the panel about sustainable music careers later that day, the room was predominantly women. Although there are women working across the industry, their participation in the tech-driven roles of engineering, production and so on is still incredibly low – which is what the ItKoS project is all about investigating. As the craft of audio engineering and producing electronic music moves ever closer to coding, and with such tiny numbers of women working as programmers and developers, I suggest we are unlikely to see much change unless we do things differently. Encouraging girls not to be afraid of tech as they are growing up, and programmes for girls where they feel free and safe to learn from scratch, even if they are in their 20s, 30s or beyond – such as the newly launched Music Production for Women course curated by Xylo Aria.

Another interesting perspective was a female producer of colour (that was her description of herself) who noted that not only do you have to pluck up your confidence and navigate the challenges that you see for yourself, you also have to navigate ones that others see for you too. She told me that for years she was pigeon-holed by the people she worked with as ‘the singer’ as that was an appropriate role for her to do, and it was only her strength of character that drove her to question this, and learn to produce her own tracks too.

But I also heard a lot at the conference about the importance of relationships and networks – making contacts, building friendships around music communities, sharing skills and doing good things to help one another. Nurturing quality relationships was perhaps particularly poignant at this year’s conference with the death of Aviici last year sparking serious conversations about the mental health of musicians and DJs. One quote I scribbled in my notebook was “Hold yourself well in the industry – on your socials and in person”, not only will this help you to get your music signed to a label who want to be associated with you, but it’s a dignified and dare I say it nice way to act. These are all things that women have traditionally been socialised to be very good at. The ability to form meaningful relationships is an oft-quoted feminine trait and I felt encouraged that the electronic music industry held these things in such high regard – surely this bodes well for women’s success in the future.

*these figures, admittedly are now 8 or 9 years old, I don’t expect they’ve changed much