Last week I gave my inaugural lecture as a Professor at the University of Portsmouth. I was speaking on ‘Doing what you Love: the aesthetics of 21st century work motivation’ and the talk was inspired by what I’ve learned through ‘In the Key of She’ about the importance of love as the driving force behind electronic music producers’ careers.  As well as learning their craft and honing their skills, newbie DJ/producers will be hustling for gigs and opportunities – work for which they rarely get paid well, if at all. Good equipment and tuition don’t come cheap either, despite all the free stuff that’s out there, so they’ll most likely be keeping up a day job as well, just to make ends meet. Add to that the need to feed a growing content-hungry fan base with cool stuff and free downloads on social media, and it’s easy to see that starting out in the industry brings some of the toughest challenges a DJ/producer will face.

So why do it? A couple of weeks back, I spoke to Trisha O’Brien aka Trish Complete about just this. Trish has been DJing on the London circuit for years now, having played at Ministry of Sound, Pacha, the Hed Kandi parties… among many others. She’s done her time selling tickets for her place behind the decks, as so many DJs have to do, is already a well known DJ in her home town of Bangalore, India and has played in Ibiza, but wanted to grow her career further here in the UK. Trish has been making tech-house edits of 90’s tracks for some time but felt she’d hit a plateau. But her decision to learn to produce her own original tracks was driven by her passion to know how her favourite tunes were made as much as it was a strategic investment in her future career. Inspired by conversations with heavyweights like Sister Bliss and Danny Rampling, she’s a graduate of the DJ Academy, and currently a final year degree student at Point Blank Music School, as well as a great fan of online course platform Fader Pro. She’s also a Toolroom Ambassador, having recently been part of Toolroom Records’ brilliant ‘We Are Listening’ initiative to find and grow non-male talent for the label and beyond. She does all this while working as a carer in adult mental health, a topic as close to her heart as her music. 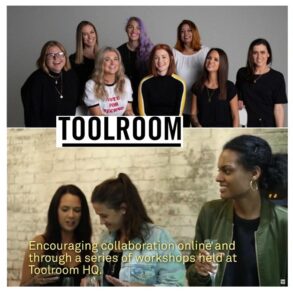 Trish an absolute beacon of inspiration, having fought through a whole bunch of health and family difficulties in the past, using the power of music to heal and grow. One of the more unexpected things she told me she’s learned from her music education is knowledge about herself – she knows that she wants to inspire and support other women to follow their dreams in music as much as she wants to make her own tracks. This passion comes through in Trish’s social media presence and the energy she brings to what she calls her ‘Craft, Hustle and Grind’, which is a perfect name to capture the realities of learning to be a DJ/Producer: it’s hard work, persistence and effort just as much as it is talent, sparkle and connections. It’s clear this will fuel her future plans – of which she has many.

As one of only a small handful of women on her degree course, Trish spoke of the contrast between her experiences in the classroom at Point Blank surrounded by young lads, and how she felt as part of the group selected for A&R feedback and development through Toolroom’s ‘We are Listening’ events. Being among like-minded women was not only inspiring but friendly – although she told me that she still felt way behind them in terms of production skills. But as someone who says she didn’t know what an EQ was just a couple of years ago, it’s clear that she’s still come a heck of a long way since then! Trish is currently working on her first release but assures me it’s going to be shared with the world very soon. I hope so, because perfectionism is the enemy of productivity and all too often it seems that women are reluctant to just put themselves and their music out there. I’ve heard several A&R folks tell me how much they want to sign music from a more diverse range of artists, but that they rarely get sent demos by women.

In part this is probably because society encourages girls to smile quietly, look pretty, be nice, to wait in the wings until asked instead of the ‘go-getting’ action oriented adventure messages that boys learn about how to behave. We can even in see it in the slogans on baby vests, that’s how early this starts, and in the dance music world this fearless attitude translates into sending off music even when it feels risky, and the chance of success is slim.

In the wider tech world, statistics from an HP report show that women don’t apply for jobs unless they can match all the qualifications asked for, but men will go for it if they meet 60% of the requirements. The easy assumption is that women just “need more confidence”. But recent research by Tara Mohr in the Harvard Business Review, shows that it’s not a lack of confidence that’s the issue, but a lack of ‘insider’ knowledge about how hiring processes work. Which shows how important it is to invite women into the networks and circles where men more naturally pick this stuff up. It’s not unreasonable to think this is happening in the electronic music industry too – as Trish told me, one of the most useful things she’s learning through her music education is how to pitch yourself, and make contact with the people who matter. It was her pitch that got her noticed by Toolroom from the 90 other producers who applied for just 15 places on the first ‘We Are Listening’ event in May 2018. This stuff works. So as well as helping women gain confidence through mentoring programmes and workshops, this suggests we should focus on explaining the mechanics of the music industry just as much as the softer-side of success women are assumed to lack.